At Meet & Eat, we believe in the classic art of bringing people together over delicious food­— and nothing says classic togetherness like a burger! But have you ever wondered why all of America has come to love this simple sandwich? Read on for a tasty history lesson and to learn how Meet & Eat is elevating this beloved staple.

Where it All Began

The true origins of the hamburger are a little murky. Ask some experts, and they might tell you that it first popped up in the 19th century in the city of Hamburg, Germany. Others, however, may tell you that despite being named after a German city, the hamburger is all-American. In reality, versions of the modern hamburger had existed in Europe and America for years before it was formally named, because it was a hearty and convenient meal for the working class.

Most likely, the “official” hamburger recipe traveled with immigrants from Germany to New York City. In the 1800s,  Hamburg was known for its Hamburg Steak, a ground meat dish that looks very similar to a burger patty. Hamburg Steak became a popular dish at NYC restaurants, and soon reached the rest of the United States.

Who Deserves the Credit?

In keeping with the fuzzy origins if the hamburger patty, it’s not known who was the first American to create and market the hamburger as we know it today. There are stories of a chef in Texas putting Hamburg Steak between two slices of toast, food vendors from Ohio selling it at county fairs, and others that say we owe it all to the founder of the restaurant chain White Castle. In reality, all of these stories hold some truth, and the burger was probably being created by multiple entrepreneurs simultaneously in the early 1900s.

Eventually, enough people were creating and enjoying the hamburger as we know it today that it became a regular on American menus. Fast food giants like McDonald’s and In N Out Burger built fortunes on their burgers, and the dish became quintessentially American. 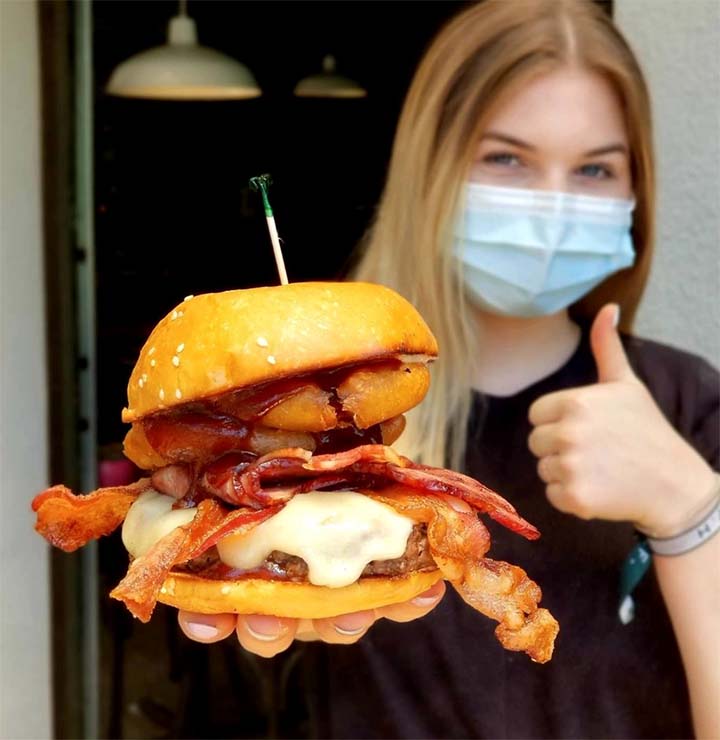 What Makes Our Burger Special?

In light of its rich history, it’s no secret that you could grab a burger from anywhere these days, but at Meet & Eat we want burgers to be more than just a meal. Our ingredients are locally sourced, always fresh, and built with the intention of fostering new relationships with our customers and our partners. We want every bite to be memorable, not just because of the delicious and unique flavors, but because of the atmosphere, you’re enjoying it in. So, bring the whole family and try something new, like our Seattle De Lux burger, or our Caucasus Lamb burger. With every bite, you’re a part of history!